In December, our family completed a pilgrimage to the Disneyland of dinosaur parks—Dinosaur World in Plant City. The park boasts over 150 life-size dinosaur sculptures nestled among native Floridian flora.

Like many theme parks, you enter through the gift shop. We visited during Christmas and the place was decked out accordingly. At the center of the store stood a huge Christmas tree adorned exclusively with dinosaurs.

My 6 year old son, Matthew, marveled at it and said “Look, Dad, that is so cool.” “Yeah son,” I said. “Isn’t it neat how all the ornaments are dinos?”

“No, Dad. What’s neat is that they’re organized by time period. The top of the tree is the Triassic, the middle is early then late Jurassic and the bottom of the tree is Cretaceous.” Incredulously, I asked an employee who confirmed Matthew’s observation.

Children’s brains are like sponges—they have an incredible capacity to absorb and retain information. Scientists call this exuberant synaptogenesis. Unfortunately, when it comes to Mass, many families do not take advantage of this neurological process and simply keep their kids entertained with a coloring book, toy or (gasp) iPad until the hour-long “torture” is over. Too often children sit in the pews, bidding their time, next to parents who believe the Mass is too complex for their young minds.

Even though Aesop’s quote says otherwise, in almost every facet of life, the more you know about a topic, the better you can appreciate it.

Geurnica may appear to be just a black and white painting of contorted human and animal figures. But understanding the artistic development of Cubism, the events surrounding the Spanish Civil War and the threat of fascism will allow one to see the painter’s genius.

An NFL football game looks like random running, throwing and kicking. But once the rules are assimilated, the athleticism of Jerry Rice, the accuracy of Dan Marino and the coaching savvy of Vince Lombardi will be rightly recognized as legendary.

And so it is with the Mass. The better our children understand it, the more they will appreciate it. And appreciation begins with familiarity.

For some families, Mass is something that takes place for one hour on Sunday and is never mentioned again for the next 6 days, 23 hours. Mass does not enter any part of domestic life and is confined to the walls of the local parish. It exists in a bubble isolated from the “real world.”

To familiarize your little ones with the Mass, to quote the 40th U.S. President, “tear down this wall.” Talk about the Mass outside of Mass! But where do you begin?

Fortunately, you do not have to develop your own lesson. There are many worthy resources designed specifically to help your little ones more actively participate in the liturgy.

What’s in a Name?

When God created the animals, he presented them to Adam who gave each its name:

“So the LORD God formed out of the ground all the wild animals and all the birds of the air, and he brought them to the man to see what he would call them; whatever the man called each living creature was then its name.” -Genesis 2:19

Calling out the name of the beast meant he had some control or dominion over it. It ceased to be foreign and alien and became familiar and intimate.

Likewise, teaching the names of the items used at Mass will begin to break down the barrier. The liturgy is filled with many objects, furnishings and vessels that are exclusively used there. Since they are seen infrequently—and often at a distance—many are unfamiliar to children. Having them learn the names of the shiny objects and colorful vestments is a great first step in teaching the Mass.

Wanting my two children to learn the names of the objects, I created a Memory Match card game that I made available on my website. The free printable PDF can be downloaded here.

The cards are intended to be played in the home. This inserts churchy objects and words into the domestic space—the tearing down of the wall begins and an opportunity for discussion arises.

To my surprise, the link to the cards were shared extensively through social media and especially among homeschoolers. I received several emails from enthused families that were using the cards daily. The Diocese of Oslo asked that the cards be translated into Norwegian for use in their parochial schools. This made clear the need for such a resource.

After a few weeks of use, the cards I printed for my own children started to exhibit some wear and tear. For this reason, and the fact that they are in black and white, I decided to create the cards in full-color and had them printed professionally on high-quality laminated card stock identical to casino playing cards.

The addition of color makes the objects more memorable and appealing to children. Instead of just 12 objects, there are 52 unique objects divided among two sets. For more info on the cards, visit here.

I also created a 12-page, full-color companion PDF which can be downloaded free of charge here.

The PDF shows real-world pictures of the illustrated items on the cards and a brief definition. This way, the game cards become flash cards and children can learn a little about each object and not just its name.

The definitions can be read by older children, or can be used as a visual aid to help instruct younger ones.

The Catholic Words and Games App

In the first years of life, children learn about the world primarily through their senses—experts call them modalities. Hands-on, interactive learning is extremely effective when teaching elementary age children.

The success of the Memory Match game sparked the idea for other games that could be played on any tablet or smartphone. This collection of games was named Catholic Words and Games. Movement and sound are added to the pathways of learning facilitating the retention of information. With the app on a mobile device, interactive learning can occur in the home, in the classroom or on the go. 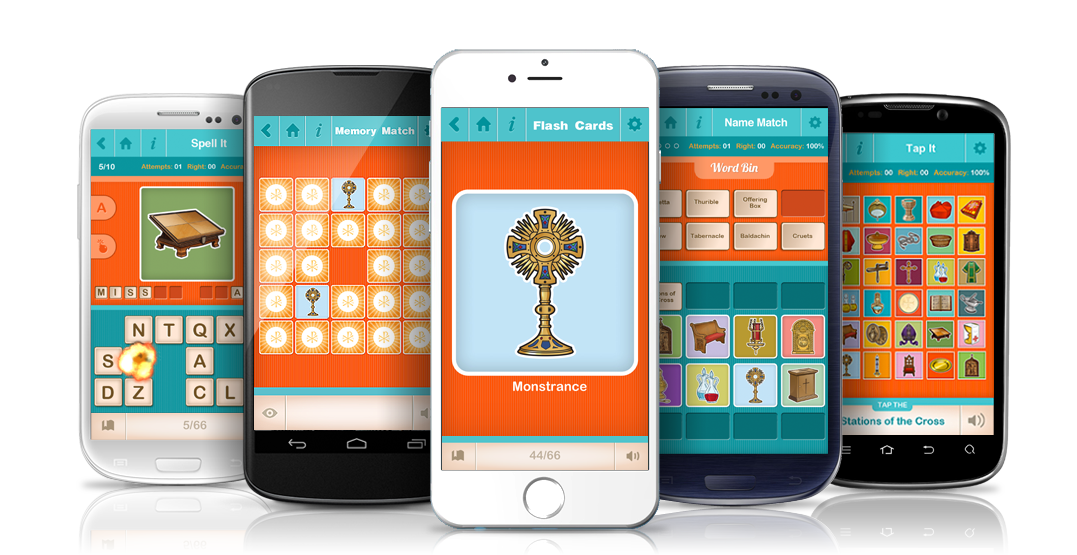 But more than just kids, the words may be new to adults too. Do you know when a “crotalus” is used? Or who sits on a “faldstool”? Or the proper color of a “mozzetta”? If not, this app can teach you and the games are fun for all ages.

For more info on the app visit www.CatholicWords.com. Here’s a demo video. And yes, that is my wife and two children:

Introducing your little ones to these words will help them prepare to receive the Sacraments and inaugurate a lifelong journey of learning about the wonders of their Catholic faith.

This post is in response to several emails from exasperated parents longing for their children to show some interest in what happens at Mass. In addition to my own home-grown solutions, there are many online resources that can help.

My friend and catechist extraordinaire Joyce Donahue put together this Pinterest board.

These resources will provide catechists, teachers, youth ministers, homeschoolers and parents a fun way to help their students or children learn about the Mass. Once the lexicon is assimilated, the Mass will cease being perceived as “foreign”. Your children will begin to think “this is part of my own faith, its part of who I am. It’s not just something Churchy we do on Sunday, but it’s part of my daily life.”

Familiarity will help them more fully engage in the Sunday Eucharistic celebration. But it all begins with the first step!

How about you? Can you contribute any tips on helping teach the Mass to children? Do you have any experiences you could share? Are you a teacher? Catechist? Homeschooler? What has worked for you? Share and let’s learn together!

I teach 6th grade Catechism. During the year, the kids learn about the meeting tent, the temple, the synagogue, assorted sacrifices, and food miracles. Then during our last month, all those things are brought into our study of the Mass. And you are right- kids’ brains are super-nimble, and ready to absorb what many would regard as adult concepts. I never baby the kids, and every year surprise me again.

Wow! These are indeed meaty topics! From John calling Jesus the “Lamb of God” to the Temple curtain ripping in half, learning about the Jewish roots of the Mass is absolutely critical for a more complete understanding of the Liturgy! Thank you, Christian, for challenging our kids! Fortifying them with this understanding will serve them well as adults if they’re ever challenged on the meaning of the Mass. Unfortunately when I was in CCD in the 70s, it was all about memorization. I can’t remember any teaching on the meaning behind the words.

Ha! My 1960s CCD was likewise heavy on memorization, light on understanding.

Where we live in the Bible Belt, the kids are virtually guaranteed to be challenged about Catholicism. I try to prepare them for that so they can evangelize as the chance arises.