Gravity is the natural force that causes things to fall. It influences objects of all sizes—from a minuscule grain of sand to a mammoth meteorite. Both solids and liquids are bound to its effects—even Jesus’ own body and blood.

In Gethsemane, our Lord’s blood drips on the garden’s floor and the Stations of the Cross tell of Jesus’ body slamming to the ground three times.

To this day, the Body and Blood of Christ—in sacramental form—are under the perils of gravity’s effects.

So what happens when the unthinkable happens; when, while standing for Communion, we see a Host fall or the Precious Blood spill?

Why all the fuss?

Before exploring the answer, I want to make it clear that what is falling is not just a trivial breadcrumb or merely a drop of common table wine—quaint reminders of Jesus’ actions at the Last Supper. No. At Mass we are not reminiscing—it is not a gathering of people with a penchant for nostalgia.

At Mass we are taking Jesus at his word when, at the Last Supper, he took bread and said:

“This cup which is poured out for you is the new covenant in My blood.”—Luke 22:20

“Whoever eats my flesh and drinks my blood has eternal life, and I will raise him on the last day. For my flesh is true food, and my blood is true drink”—John 6:54-55

This is what we do at Mass. We obey his command to “do this in remembrance of me.”

A Testament to the truth

After the words of consecration, what was once bread and wine are now the Body and Blood of Jesus in sacramental form. This is a key doctrine of the Catholic faith—a teaching that sets us apart from most other Christians:

“Christ is ‘truly, really, and substantially contained’ in Holy Communion. His presence is not momentary nor simply signified, but wholly and permanently real under each of the consecrated species of bread and wine.”—Norms For The Distribution And Reception Of Holy Communion Under Both Kinds In The Dioceses Of The United States Of America #8

The Council of Trent dogmatically defined that:

“… in the venerable Sacrament of the Eucharist, the whole Christ is contained under each species, and under every part of each species…”—The Council of Trent, Thirteenth Session, Canon III

This codifies the fact that even the smallest particle of the Host and the tiniest drop of the Precious Blood contains the entirety of Our Lord. It is therefore paramount that we be conscious of our actions at Communion and be on guard out of reverence for the Blessed Sacrament.

Through the ages the Church devised several safeguards to minimize the chance of the Host or Precious blood from falling to the floor and a reverent protocol in case they do.

Benjamin Franklin is quoted to have said “an ounce of prevention is worth a pound of cure.” This time honored idiom couldn’t be truer when in reference to Holy Communion. 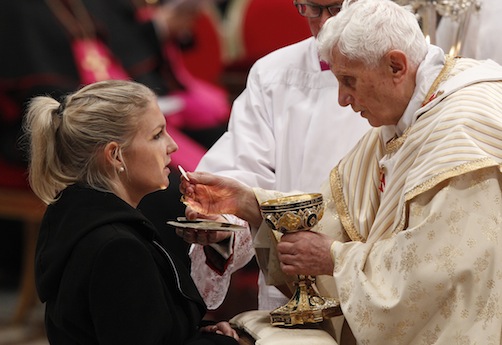 Paten
As a child I vividly remember an acolyte holding a handled paten under the mouth of parishioners as they received Communion on the tongue—lest the Host should fall. In 1977 the United States was given permission by the Holy See to distribute Communion in the hand. As the popularity of this form of reception eclipsed the former, the presence of the paten-wielding acolyte diminished. However, the practice is still seen when the Mass is celebrated in the Extraordinary form (the Latin Mass) and in Papal Masses where communion on the tongue is the norm.

Fistula:
In medieval times, in order to minimize the spilling of the precious blood, the curious custom of the fistula arose. The celebrant would dip a golden straw into the chalice and put his finger at the top to create a vacuum. The suspended wine would then be released into the communicant’s mouth. The fistula was still a part of the pre-Paul VI Papal liturgy.

Communion Spoon:
Eastern Catholic Churches who celebrate the Byzantine Rite as well as Eastern Orthodox Churches distribute communion-both elements- through the use of a Communion Spoon called a Kochliárion. The faithful are instructed not to slurp from the spoon, nor should their teeth scrape it. They should close their mouths around the spoon and carefully make sure all its contents have been removed so as to insure nothing spills or falls to the floor.

Both the use of the Communion Spoon and Fistula are still options in distributing communion:

“The Blood of the Lord may be received either by drinking from the chalice directly, or by intinction, or by means of a tube or a spoon.”—General Instruction of the Roman Missal #245

However, neither is common in the United States:

“Distribution of the Precious Blood by a spoon or through a straw is not customary in the Latin dioceses of the United States of America.”—Norms For The Distribution And Reception Of Holy Communion Under Both Kinds In The Dioceses Of The United States Of America #48

Communion Cloth:
In addition to the use of the spoon, Eastern Churches also use a red “Communion Cloth” placed underneath the chin. After receiving, the communicant carefully dabs his or her lips with the red cloth in case a small crumb or drop of wine remains.

Similarly, eastern churches may stretch a cloth between two servers to catch any drops or crumbs that fall.

Liturgical Rug
It is the custom in some Orthodox and Eastern Catholic churches to place a small rug in front of the priest so when the faithful receive Holy Communion, they do so standing on it. If an accident occurs, the priest would consume whatever of the gifts he could from what had spilled. The rug is then removed and dealt with—typically through burning.

Despite these safeguards, accidents surrounding the distribution and reception of Holy Communion do occur. We are human. It may be humidity that causes Hosts to stick together or a child who tugs your arm at the wrong time. Regardless of how it happened, the Church has a protocol in place:

“If a host or any particle should fall, it is to be picked up reverently. If any of the Precious Blood is spilled, the area where the spill occurred should be washed with water, and this water should then be poured into the sacrarium in the sacristy.”—General Instruction of the Roman Missal #280

The GIRM is unclear as to what should be done with the host once it is picked up.

“I would say that, if the host remains clean, then either the minister or the communicant should consume it directly.”

If, for whatever reason the host is soiled, he adds:

“The process of dissolving the host in water may be used in special conditions if a host had been seriously soiled. Once the host is dissolved, the water may be poured directly upon the earth or down the sacrarium.”

A sacrarium is a special sink in the sacristy whose plumbing is not connected to the sewer system but runs straight down into the ground.

All these preventive and remediative measures emphasize our core teaching on the Body and Blood of Christ.

How about you? Have you witnessed or been part of an accident of this nature? How was it handled? Share and let’s learn together!

Normally, I have seen a fallen host handled simply and at once. Sometimes the priest or extraordinary minister simply bends down immediately, picks it up and consumes it – as unobtrusively. Sometimes I have seen the communicant do the same. (Interesting that GIRM 280 does not say what to do once one has picked it up.)

When the Precious Blood is spilled, however, I have seen them drop a purificator over the spill to mark the spot and keep anyone from stepping on it until it can be cleaned up after the communion procession or immediately after Mass.