Back in 2015, Facebook unveiled a new feature, “On This Day”, which has been renamed “Memories.” This feature shows content such as status updates, photos and posts from this date in years past.

One that recently came up on my feed was of my daughter when she was a year old. In the image, she is mirroring my off-camera expression.

This got me to thinking of how much our children, especially in their early years of development, imitate their parents as a way of learning.

Experiments have shown that there is a primitive capacity to mimic the actions of others starting from the neonatal period. Test subjects as young as 42-minutes-old have exhibited some form of behavioral matching.

This type of mimicking-to-learn continues into adulthood. Athletes learn how to swing a tennis racket, throw a football or swing a bat by watching and mirroring a mentor. And in the corporate world, job shadowing is the name given when an employee follows and mimics another to learn new competencies.

Learning about the Mass is no different.

This adorable video posted by Brandon Vogt of his then three-year-old son Augustine celebrating Mass is a testament to the power of imitation.

My own son has raised saltines above his head and recited the words of consecration while my daughter has held a book aloft and paraded around the house singing the Alleluia chant.

When we take our children to Mass, they not only mimic the words and actions of the ministers, but also our own. Watching their parents stand for the Entrance procession, beat their breast at the Confiteor, sit for the readings, stand for the Gospel and kneel at the Consecration, children begin to imitate and assimilate the postures, gestures and rhythm of the Mass. And just by mere weekly repetition, they eventually memorize the prayers.

But while the efficacy of mimicking is unquestionable, as children grow up, they need more than just mirroring and imitation as the main reason why they do what they do and say what they say at Mass.

When children naturally begin to dig deeper and ask why must they sit, stand, kneel and recite the prayers and responses, many parents can only sheepishly offer “it’s just what we do”. Unfortunately for many children, this is where parental catechesis on the Mass ends. Parents can pass on the external elements of the liturgy, but not the reasons behind them. And it’s probably not their fault.

When I went through CCD in the early 80s, the sole goal was memorization. “Father is going to ask you to say this prayer or that prayer. You have to be prepared.” Our CCD classes consisted of the children sitting in a circle and reciting the prayers each in turn. There was no explanation as to what the words meant or why they were recited at that particular point at Mass. When my generation had children of their own, we were ill-prepared to explain the meaning behind the words, gestures and postures.

So today, many in the pews—both young and old— are part of a multi-generational line of mimickers and imitators who, unfortunately, have been poorly catechized. It reminds me of this eye-opening video from National Geographic’s Brain Games:

As seen in the video, the unsuspecting subject sits and stands by mimicking the crowd with no explanation. She then passes on the ritual to new patients entering the waiting room.

So how can you better explain the Mass to children? Fortunately, there are several books, crafts, apps and other resources geared specifically to this end. Joyce Donahue—a veteran catechist, DRE and liturgy director—has culled some materials into this Pinterest board.

I have created several FREE crafts which can be downloaded immediately right here.

I have also created two apps that can help:

The first app, Catholic Words and Games, teaches the names of the objects and vessels used at Mass through fun games. Below is the promo video. The app is available for all iOS devices (iPhones and iPads), Android phones and tablets, as well as desktop computers.

The Catholic Words and Games site is here: http://www.CatholicWords.com

The second app, MassExplained, is more for parents to educate themselves on the Mass. Below is the promo video. The app can be downloaded for iPads, Android Tablets, or for desktop computers and laptops.

Here is a link to the site: http://www.MassExplainedapp.com

For those who prefer tactile resources, I created a card game that also teaches the names of liturgical objects: 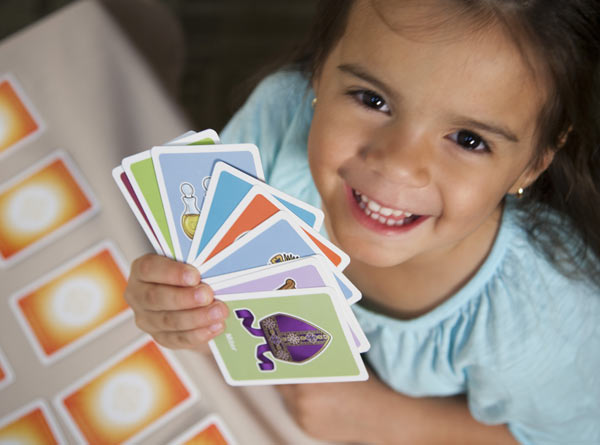 It takes time and effort to learn about the Mass. However, I can’t think of a better investment not only for yourself, but for your sons and daughters. When you pass on the reason for the ritual to your children, they will, no doubt, pass it on to theirs. Leave a legacy of learning.

Have you come across any great techniques or resources to help teach the Mass? Please share in the comment box below.

We love the Catholic Words matching card game! We put them in our granchildren’s Easter Baskets last year and we have enjoyed playing with them on a number of occasions! Thanks for all you do to help us help our children to grow in the Faith!